Modifier Dogpiles: There's a Frog on the Bump on the Log in the Hole in the Bottom of the Sea

From a Yahoo finance story today:

U.S. stocks fell on Monday as investors worried that the holiday shopping season might have gotten off to a tepid start as consumers trimmed purchases over the Thanksgiving holiday amid concerns about an uncertain economy.

There's nothing technically wrong with this sentence. It's just a great example of how, every day, I get worse at reading for content because I'm so focused on form. Whenever modifiers -- especially prepositional phrases but also subordinate clauses -- are dogpiled this way, I lose all focus on meaning and instead go to, "How might they have rearranged this information better?"

"on Monday," "as investors," "that the holiday," "as consumers," "over the Thanksgiving holiday," "amid concerns," "about an uncertain economy." How can I possibly be expected to pay attention under these circumstances?

There's a hole in my brain in my skull on the lobe where the thoughts on the meaning oughtta be ...

Posted by June Casagrande at 9:21 AM No comments:

I hope everyone has a happy Thanksgiving, unless you're one of the people who messes up everyone else's Thanksgiving (I'm looking at you, Drunk Uncle Joe, the cousin who polishes up his holiday conversation skills by watching Fox news, and any family member who begins any sentence with "Why can't you be more like ....")

Everyone else in the U.S. have a happy holiday. (And for those outside the U.S.: Don't worry. You're not missing much, unless you enjoy seeing overweight Americans sitting on a couch with the top button of their pants undone.)

Posted by June Casagrande at 6:09 PM No comments:

In other news, NYT blogger Anahad O'Connor dedicated today's post to some typos in the menu at a White House dinner. "Willamette Valley" was spelled wrong in a wine description, "chickpeas" was written as two words and elsewhere there was one missing hyphen and one missing accent mark.

The point: "One person the White House apparently neglected to hire was a spell checker."

Too bad the wine wasn't from Molehill Winery. Then O'Connor could have bemoaned how no one changed it to Mountain Winery.

On Twitter, I follow Fake AP Stylebook, which is hilarious to anyone who's worked with the real AP Stylebook. One of today's entries:

Avoid using "decimate" as someone will pipe up about it meaning "remove 1/10th of," and those people are dicks.

Posted by June Casagrande at 9:09 AM 4 comments:

Why I Love Google Maps Streetview

Nothing to do with language. Just thought others might enjoy this.

Here, caught on car-top camera by one of the people who were paid by Google to drive down every street this side of nowhere, we see: a man examining his fingernails while chatting on his cell-phone (presumably about his fab no-polish manicure), a carpetbag-carrying-dude with his carpetbag-carrying ghost, and a gentleman who spends his days wishing he lived on a planet where crosswalks were named crosstangos. 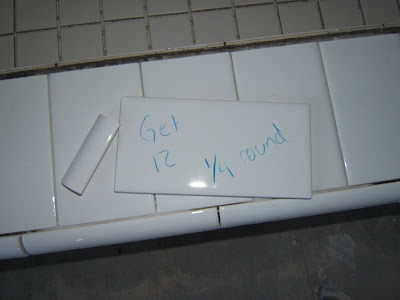 When I left the house yesterday morning, the guys laying the tile for our new bathroom warned me that they might need me to get them more "trims" -- the little edge tile pieces -- of the type known as "quarter rounds."

When I got home last night, I saw that they left me this note.

I'm just glad that I'm not working with a septic tank guy.

Not Commas But Not Not Commas, Either

I'm pondering the commas in this sentence, which was is based on a passage from a CNNmoney.com article:

"Then someone sees, not words on a page, but a vibrant person sitting across the table from them."

From time to time I encounter these structures while copy editing -- the "not blank but blank" structures. I'm never confident in how to handle them commawise.

Should "not words on the page" be set off with commas, as it is here? Clearly, the phrase is an insertion -- an interruption. But, combined with the "but" before "a vibrant," the commas sever the transitive verb (sees) from its likely intended object: (a vibrant person).

Obviously, there's nothing wrong with inserting parenthetical information between a verb and its object. But when the result is to resume the non-parenthetical with a "but" that comes before the object of the verb, it seems to create a logic problem for the whole structure.

My inclination is to leave the commas out: "Then someone sees not words on a page but a vibrant person sitting across the table from them."

I should note: The original sentence was actually a little more complicated: "If someone sees, not words on a page, but a vibrant, energetic person sitting across the table from them, age becomes much less of an issue."

Those other, obviously correct commas seem to somehow make commas around the "not blank but blank" phrase more beneficial.

If only this issue were as easy as whether to eat turducken.

Know You Could Spend Half a Day Wondering Whether This Is a Question (. ? . ? )

This morning, Ted found one of those hanging brochure thingies on our doorknob. The first sentence:

Know you could chase down the guy who left this on your door.

It's an ad for Gold's Gym, the message being that if I signed some centuries-long contract with them, I would be able to leap tall leaflet-hander-outers in a single bound. (They don't mention whether I would also look good in one of those Gold's Gym muscle tank-tops, and by "good" I mean "as ridiculous as all the other human knots who wear them.")

Anyway, we spent some time noodling over the intent of the sentence. At first, I thought it was a truncated question:

Did you know that you could chase down the guy who left this on your door?

But on the brochure it ended with a period and not a question mark.

Then we wondered whether "know" meant "now," but that didn't make sense either.

In the end, I found my guiding light some "Simpsons" dialogue. In an old episode, shyster lawyer Lionel Hutz is struggling to stay sober. He calls his sponsor, David Crosby, who says: "Just take it one day at a time. And know that I love you."

In other words, it probably means "know THAT you could." (There's nothing wrong with dropping a "that," unless by doing so you create enough confusion that it ends up on some stranger's blog.)

Know that I could, if I wanted to, find my way through life without "The Simpsons." It would just be a lot harder.

Some years ago, I ordered some chicory coffee and some beignet mix from a company called Cajun Creations, at which time I subscribed to their e-mail list.

Since then, every year around Thanksgiving, I get e-mails about deals on turduckens. I knew they were some kind of multibird bird, but never bothered to read more until today, when I finally read enough to learn the definition of turducken. From the Cajun Creations e-mail:

Turducken is the true taste of Louisiana. We take a turkey, duck, and a chicken, and de-bone all three (except for the legs and wings of the turkey). We put the chicken inside the turkey and then the duck inside the chicken.

It's going to take a long time to sort out my feelings about all this.

Copy-editing Catch of the Day

I realize that, linguistically, that's not very interesting. I'm just so ... damn ... proud I caught it.

And for anyone who simply must know more about tartar, tartare, Tartars, and mayonnaise-based fish sauces, the Web has you covered.

Posted by June Casagrande at 10:43 AM No comments:

Just When I Thought I Knew Every Possible Reason to Dislike Merriam-Webster ...

... I learned that, according to Merriam Webster, we copy editors don't copy edit. We copyedit.

I'm not saying it's wrong. I'm just saying it's gross, unseemly, disorienting, and disturbing. Other dictionaries let me copy edit, why can't Merriam?

Posted by June Casagrande at 9:38 AM 9 comments:

Words I'm Looking Up (One in an occasional, cleverly named series on words I'm looking up

In a recent column on healthcare, Paul Krugman wrote that "the teabaggers have come and gone."

I've been hearing variations on this word a lot in the last few years, but not like that. Not like that at all.

Usually, the term is uttered by a Jon Stewart or a Seth Rogen and received by snickering twentysomethings privy to all kinds of filthy new figures of speech. I've resisted the temptation to look up the Stewart-Rogenesque form of the word because, well, I don't know. Maybe I'm getting too old for Beavis and Butthead humor. I certainly hope not.

But when a Princeton professor and New York Times columnist uses "teabagger," well, that lends some academic legitimacy to my search for truth.

But here's the thing: Neither Webster's New World online, American Heritage online, nor Merriam-Webster online contains an entry for "teabagger," nor for "teabag" or "tea bag" as a verb.

Which leaves readers like me with no better resource for understanding Krugman's comment than UrbanDictionary.com's definition of the verb "to teabag."

Hey, I wonder if there's an old Beavis and Butthead episode on ...