In a story I was editing, I came across something like:

"This avant-garde film movement was a response to the perceived artifice of
1950s mainstream cinema."

Not sure what the writer was trying to say, but I have a feeling artifice wasn't the word to say it:

artifice 1. An artful or crafty expedient; a stratagem. See Synonyms at wile. 2. Subtle but base deception; trickery. 3. Cleverness or skill; ingenuity. -- American Heritage Dictionary (via dictionary.com)

The restaurant's soup of the day, served in a large terrine, is more than one person could possibly eat.

The change: terrine to tureen.

This wasn't one of those "gotcha, you sneaky so-and-so" catches that I find so satisfying, but it was still a good one. The reason: The writer really may have meant "terrine."

terrine. n. An earthenware container for cooking and serving food. Any of various dishes prepared or cooked in a terrine. -- American Heritage Dictionary (via dictionary.com)

Compare that with (also from American Heritage):

Still, since the second seems to be more soup-centric, I went with it.
Posted by June Casagrande at 1:48 PM No comments:

Catching the error in this sentence from a Q-and-A article about a cancer survivor:

"While in the throws of your illness, did you ever feel like giving up?"

(I know the typo will be immediately visible to some. But when you're reading for content, clarity, voice, style, punctuation, confirming that all speakers have proper first attributions, that all assertions and implications are sufficiently backed up with fact, etc., it's easy to miss something like this. Hence the fact that the editor who read it before me didn't catch it. Scroll down to see correction.)

Book Tour by the Numbers

34: number of heel-to-toe steps it took in my size 8 shoes to traverse the dining room and adjoining living room of our "fireplace suite" at the Alexis hotel in Seattle (that's not counting the adjacent bedroom)

0: number of times we used the fireplace

0: number of times in our lives when we've stayed in a hotel room that big and that nice (thanks, Penguin!)

35: number of minutes I had to make it from my 7:55 a.m. Portland airport arrival to the KATU-TV studio where I would be on live local TV

4.25: hours of sleep I got before said live TV appearance

2: number of times interviewers asked me about the overuse of "literally"

3: number of times people asked me about "Bob and me" used as a subject (as opposed to "Bob and I")

4: number of times people asked me whether text messaging, e-mail, and the dang kids who used them are messing up this here English language

2: number of times people asked me about the "at" at the end of "where are you at?"

85: high temperature in Pasadena the day I got home two days later

91: high temperature in Pasadena the day after that

0: number of flights that were delayed (big difference from my wedding/honeymoon trip a few weeks before)

50ish: the number of times I told my husband how much better a book tour was with him along for the ride

3: number of consecutive days I wore the same black slacks without washing them

4: approximate number of hours Ted or I spent trying to get our "kitty cam"* to work

3: number of friends who said they or a loved one heard me on NPR

6: approximate number of ounces of water I dumped on the studio floor when I spilled my cup during a brief break between live radio broadcasts at KUOW-FM in Seattle

1: number of items I took out of hotel honor bars on Penguin's dime (but that was one damn good Canada Dry ginger ale)


* Re the kitty cam: Some time ago, I bought a PC card and some cameras that allow me to remotely monitor our home -- both in real-time and via motion-detect recording. That's right, I can log in remotely on a Tuesday, punch up a timetable of stuff that was recorded on motion-detect on Sunday and watch recorded action such as Tibor licking himself or Maddie licking herself or Smudge engaging in her daily exercise which consists exclusively of changing sleeping positions. There's just one problem: In the last month in which we were on the road for three whole weeks, we were only able to connect to the server on one day. We think the problem is that our dynamic IP address is just too damn dynamic. It keeps changing on us. It sure would have been nice if we could have confirmed that our house had not burned down and our cats were alive and not trapped in a closet or a box or something. (A couple of them really are that dumb. Tibor recently managed to trap himself in a pet carrier that had been perched precariously on some folded comforters. It tipped over in such a way that the door was lodged against the wall of our closet and his body weight held it firmly shut. The door to the carrier has since been removed.)
Posted by June Casagrande at 11:14 AM 4 comments:

I’m one of those sober people. Haven’t had a drink for a long time. A very long time. I’ll spare you drama queen version and instead sum up the gory days in as few words as possible: lost jobs, lost friends, lost contents of stomach, early-stage DTs (yes, really), smashed cars, waking up in the hospital after smashing said cars to a cop standing over me saying, “Young lady, are you aware you were three-point-oh? Three times legally intoxicated?”

There’s only one thing I’ve ever done that, for me, rivaled the difficulty of quitting drinking: quitting smoking. I know that for some people quitting smoking isn’t quite so harrowing. But for me it was about as easy-breezy as removing my own gall bladder with a rusty garden trowel.

So, long story short, I don’t drink, I don’t smoke, I don’t mess with any of the lovely prescription drugs I’ve heard so much about and which seem to make air travel a breeze. I find my soma, when I need it, in cat ownership and Simpsons reruns.

It works just fine. Then I go on book tour.

I’m writing this from the bathroom of room 422 at the Prescott Hotel in San Francisco, where I’m up early in advance of a Stacey’s Bookstore signing and trying not to wake my husband.

The Prescott Hotel is a lovely place -- all the lovelier for the fact that they upgraded us for no reason whatsoever to a “Club Level” room. From what I can tell, it’s just like any other room, except it comes with free top-shelf cocktails from four-thirty till six. We go to the lounge. Ted orders a martini. I order a ginger ale. It’s all good, except it begins to conjure memories that in turn cause me to suspect that the wonderful world of authorship is trying to get me loaded.

The last book tour -- two years ago for Grammar Snobs -- made all too clear the possibility that a cabal of New York book publicists is conspiring to help me help myself get to the morgue on time, with a brief layover in the gutter.

In the 2006 tour, it started in Seattle. I was scared in that butterflies-in-the-stomach kind of way and sick over a couple of negative user reviews on Amazon. My book tour was going to include teaching a Mediabistro course, which terrified me, and giving a talk, all by myself, to an auditorium that seats hundreds of participants at Portland’s Wordstock festival. The tour was ten cities, unlike this tour’s four. My husband wasn’t with me then. And my stomach felt like I’d been doing lemon juice shooters with a milk chaser.

I checked into the gorgeous Alexis Hotel in Seattle (they have an Author’s Suite that’s about the size of my whole downstairs back home), I paced like a lunatic for two hours, then went to my book signing. When I returned, I found a lovely surprise from management. A note (paraphrased from memory):

Thank you for staying at the Alexis Hotel. We have taken the liberty of obtaining a copy of your book in the hopes that you will sign it as a permanent addition to our library. Please also accept this amenity with our compliments.

The note was next to a copy of my book, a bag of roasted almonds, and a bottle of white wine on ice.

I signed the book. I took the almonds. And I felt like an ungrateful schmuck for leaving that lovely (I suspect) bottle of wine sitting untouched.

Then came Milwaukee, where I checked into another beautiful hotel room, pristine and perfect except for the fresh smell of cigarette smoke in the air and an open pack of Marlboros and lighter sitting on the bed. For a moment I thought they’d accidentally given me an already-occupied room. But no, either some employee had stopped in for a smoke or perhaps this had been a wait-here-while-we-get-your-real-room-ready room for some other guest. Either way, it came with a free sample of kiss-your-freedom-from-cigarette-addiction-goodbye.

I’m proud to report that my weak state of mental health didn’t cause me to hesitate as I set the cigarettes in the hallway outside. No harm done.

An hour later I was in the bathtub, trying to wash the stink of book-tour terror from my hide, when I noticed on the white tile floor a small white bump that, upon clearly focusing, I saw was a large pill. A horse-pill-type caplet with no markings of any kind to indicate whether it was a calcium supplement or a quaalude.

And that’s when I knew that Satan schedules book tours.
Posted by June Casagrande at 9:17 AM 3 comments:

Came across it used curiously in a Los Angeles Times blurb about the search for an AIDS vaccine:

I had to stare at that for quite some time to realize beggars wasn't functioning as a noun.

Per American Heritage Dictionary (via dictionary.com):

1. To make a beggar of; impoverish. 2. To exceed the limits, resources, or capabilities of: beauty that beggars description.

Posted by June Casagrande at 3:32 PM No comments:

-- from The Revenge of Anguished English by Richard Lederer

For those of you kind enough to keep checking in all the time I've been dark (and esp. Deb and RS), here's where I've been: 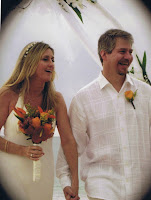 (I'm the one in the dress.)
Hurray! It was a small affair on a beach with just two dozen guests. A pretty darn happy day.
Now I'm back with, ironically, another installment of Words That Should Get a Divorce: "shock" and "hair." Came across that one on in a beach read on my honeymoon. Is there no other quantity of hair that writers can think of?
Posted by June Casagrande at 7:52 AM 2 comments: