Look Out! That Word's Been Banned!

Reuters today reported on some overused and icky terms that are now "banned."

Think "sexting," "unfriended," and any compound including the word "czar."

The Reuters piece is extremely informative -- not for what it says but for how it says it. You see, the headline tells us that several words are "in U.S. banned words list." Then the first paragraph says:

"Fifteen particularly over- or misused words and phrases have been declared 'shovel-ready' to be 'unfriended' by a U.S. university's annual list of terms that deserve to be banned."

Those are the types of questions that journalists like to draw attention away from because they make for much less-interesting articles.

And only after reading all that do we learn that the self-appointed word-banning czar isn't even one of the nation's best-known or most respected, though Lake Superior State U. now gets my vote for the most media-savvy.

Back when I was a reporter, I used to pull the same trick: Play up the implications, play down their validity. And if I didn't, my editors would do it for me. It's just how news works. And my guess is that readers are getting wise to this brand of sensationalizing.

So, while this brand of spin isn't necessarily so awful, the Reuters story nonetheless offers a "teachable moment" that makes me wonder whether media spin is a "toxic asset" calling for a "news czar" to declare such news stories "shovel-ready."

Posted by June Casagrande at 9:40 AM 6 comments:

Earlier this year, I wrote here about about "the aughts," the name for the decade about to end. As I wrote, I prefer the spelling "aught" to the also-used "ought" because the former poses less risk of confusion.

Yesterday, Paul Krugman's column in the New York Times mentioned the "aughts." Today, the Los Angeles Times once again indirectly voted for the "ought" spelling.

But at least the L.A. paper spells aka without spaces, as the New York paper did in the Krugman column linked above.

Posted by June Casagrande at 8:52 AM No comments:

As work continues on our bathroom addition, I become more — not less — confused about how to pronounce this word. Some people say it "WAYNE'S-coating," others say it "WAYNE-scotting."

So I finally went to YourDictionary.com, where they have audio files that let you hear the pronunciation, and here's what I heard: "WAYNE-skuh-DING."

I guess nobody knows. Sure looks pretty, though.

Posted by June Casagrande at 11:59 AM No comments:

In a fashion article I was editing today, the writer had said that a hairpiece metamorphosizes an entire ensemble.

I stared at it for a long time try to figure out why it seemed both right and wrong. In the end, all I figured out is that it's wrong -- at least, according to Webster's New World and Dictionary.com, anyway.

Both dictionaries say the verb form of metamorphosis is metamorphose. No "ize."

Though it sure seems I hear a lot of people "ize" that word. I bet I've done it myself. 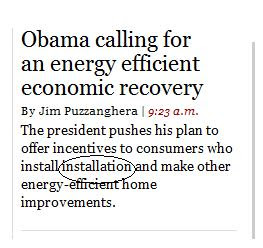 From the main page at latimes.com today. Their layoffs are showing.
Okay .... NOW I'm going dark.

Posted by June Casagrande at 9:56 AM No comments:

I'll be back next week!

Posted by June Casagrande at 9:10 PM No comments:

Came across this in my copy-editing work today:

Recovery time varies but is approximately about one week.

I bow down in awe of the inefficiency. I enjoyed this so much I was almost reluctant to change it. On the other hand, razing it was pretty enjoyable, too. It now reads:

Recovery time is about one week.

Posted by June Casagrande at 10:53 AM No comments:

This surveying of the invited dinner guests is what led Joe to serve ham.

The trouble starts with the nominalized sentence subject, but it goes downhill from there. Why couldn't the writer have made "led" the verb instead of "is" to set up "is what led"?

Posted by June Casagrande at 2:43 PM No comments:

Ah, I Always Wanted a Term for That

... the rapid growth in finance since 1980 has largely been a matter of rent-seeking, rather than true productivity.

Wikipedia says that, basically, rent-seeking means making money by exploiting economic factors instead of by producing something that creates real wealth.

Nice to know I'm not the only who's noticed how often this seems to happen.

Posted by June Casagrande at 1:29 PM No comments:

Writing WTF of the Month

Here, modified just enough to keep me from getting into trouble, is a sentence from an article I copy edited yesterday.

"It was a lot of work," said Joe Mason of the 1968 Chevy Camaro he built using parts purchased at a half dozen local junkyards as well as a chassis and quarterpanels given to him by his dad, James Mason, an accountant at Bank of America, and assembled in his front yard over the course of six months to create what Joe had always said was his dream car.

And if you think that's bad, consider this: There was no previous mention of the Camaro anywhere in the story. That "It was a lot of work" referred to nothing the reader could yet know -- stuff that would only be explained retroactively in the quotation attribution.

The lesson here: "Of" in quotation attributions is a recipe for disaster.

To fix this monstrosity, I explained, in separate sentences, that Joe had built the Camaro, and put those sentences before the quotation.

Posted by June Casagrande at 8:35 AM No comments:

Thus, as of today, I consequently declare that “thus” and “consequently” have no freakin’ business in a news or feature article. Sure, they're useful elsewhere. But newspaper writing requires simplicity and efficiency and has no space for words that add nothing. So from here out, I’m instituting what I call a Gandalf policy for these two words in any copy I edit, summed up as "You shall not pass."

*As always, I disgused the passages so's I don't get my little old self into trouble.