I've never found word origins very interesting. Every once in a while, I'll wonder how we ended up with a word like "shampoo," so I'll look it up to see that it comes from a Hindi word meaning "to massage."

But for the most part, in those moments when I'm feeling both intellectually curious and energetic enough to do something about it, I'd much rather learn about chemistry or geology or modern French or credit default swaps than the points A, B, and C that one of our words passed through. (It probably has to do with my aversion to history and linear time in general.)

Today, however, I make an exception. It's a passage I came across in "The Omnivore's Dilemma" in a chapter about corn.

"The shelled cobs were burned for heat and stacked by the privy as a rough substitute for toilet paper. (Hence the American slang term "corn hole.")

Whom Can We Rely On, New York Times?

In this New York Times grammar quiz, the failure to use "whom" is actually counted as an error of sorts in the question 7 in the passage: "If we can’t rely on the marketers or the government or even the nutritionists to guide us through the supermarket woods, then who can we rely on?"

The reason, the Times says, is that: "If the correct grammar — in this case, 'whom' — sounds stuffy, we should try to find a deft way to rephrase a sentence to make it both fluid and correct."

The key word is "try," which means it's not mandatory, which means the sentence is fine as-is.

The only alternative would be to consider "to rely on" off limits in interrogative uses like this.

Posted by June Casagrande at 8:12 AM 8 comments:

Labels: grammar, new york times, who vs. whom, Writing


The school receives funding from the Jones Foundation, which is dedicated to fostering lifelong learning.

Posted by June Casagrande at 1:30 PM No comments:

If I Were Callin' the Shots Around Here ...

I'd say that "healthcare" is now officially one word (contrary to how the New York Times and one of the major dictionaries write it) but "cell phone" is not. Not yet, at least.

(Until it becomes more standard, "cellphone" will continue to make me think "selfown.")

Posted by June Casagrande at 7:55 AM 6 comments:

... to ascertain the approximate time of death

... to figure out the time of death

(Here in newspaper land, nobody "ascertains the approximate" anything -- ever.)

What Happens In Cabo ... 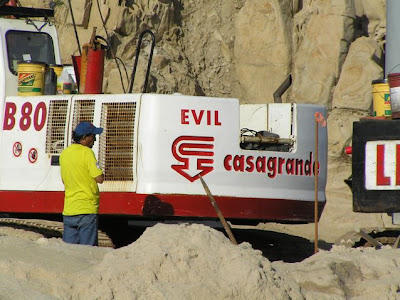 A friend of mine visiting Cabo stopped to snap this picture.

Thanks, Bill. At least now I know they're on to me.

Berks are Such Knob Jockeys

Just started playing with this "British American Dictionary" -- a service of the BBC.

I recommend selecting "insulting words" and "England" from the pull-down menu.

I'm not really sure its purpose, but it sure would be handy for traveling American jerkwads who want to understand what a waiter in a London cafe is saying about them.

There are a few words that are indispensible to the media and others because they allow them to imply things that they cannot ethically say. King of them all is "amid."

Suspect a correlation between the Afghan war debate and a sudden increase in the president's approval ratings? Just say, as Yahoo! News did in introducing an AP story yesterday: "Obama's job approval rises amid concerns."

Financial news sites would lost without the word "amid." Like "Stocks plummet amid interest rate fears."

Are interest rate fears causing the stocks to plummet? Are war concerns directly causing the spike in the president's approval rating? The news agencies don't know. They didn't research cause and effect. They only know there's a correlation.

But they suspect cause and effect. All they have to do is say one occurrence took place "amid" another.

I'm not saying this is bad, by the way. It's probably more often good than bad. The news agencies want to show that there probably is a cause-and-effect relationship at work. Just they didn't have the time or resources to prove it.

Still, even if they're using it honorably, "amid" still ranks as the ultimate weasel word.

Posted by June Casagrande at 1:11 PM No comments:

They're Finding Me, I Swear

Honest, I'm not looking for typos and other flubs. In fact, in the last few weeks I've been consciously ignoring AOL News and Yahoo! News boo-boos that jump out at me.

But not 20 minutes after I posted that last bad call by Yahoo! News, I saw this Kanye headline.

It's "led," Yahoo. Unless, of course, Kanye had been drinking from a Roman aqueduct. Surely one of your editors would tell you that -- if only you'd staff enough of them to cover the workload there.

Thanks, Yahoo! News, for letting us know that our president's review of a major war isn't an accident.

Wonderings and Googlings (Wherein I wonder about words, then I Google them)

If the Google search is any indication, the dictionaries are making the wrong call. Enter "douchebag" into dictionary.com (which includes American Heritage), Merriam-Webster's site, or Webster's New World College Dictionary's site, and they'll politely suggest "douche bag" instead.

Of all these dictionaries, only dictionary.com acknowledges that the term actually describes a type of bag. The others list it only as an insult or slang.

Posted by June Casagrande at 1:39 PM No comments:

Not on my watch. It now reads:

Recently, a friend was digging around in a bookstore and found this passage in an old novelization (a paperback based on a movie as opposed to a movie based on a book).

“His gaze darted around nervously, as if apprehensive that somehow, in some insane fashion, someone would suddenly manage to pop out of hiding and surprise him.”

My friend did not tell me the writer's name. But she did mention that, despite this dazzlng prose, she "suddenly managed" to put the book down.

Posted by June Casagrande at 4:37 PM No comments: