It's not uncommon to see in newspapers stuff like "homeowners insurance" without an apostrophe. It's not a mistake. The idea is that you can look at "homeowners" a descriptor and not a possessor.

But how, then, to explain Childrens Hospital Los Angeles?

I also saw a reference to a Womens and Childrens Hospital.

I believe there's a strong trend in this direction. For some time now, publications and businesses have been seizing on justifications for omitting the apostrophe. They don't want to use these apostrophes, so they find reason they don't have to. But now it seems that, more and more, people aren't bothering with the "this is really a modifier" justification. They prefer no justification at all.

I'm not complain', mind you. And I'm certainly not trying to stop the trend. (I know how productive those little campaigns are.) I just don't know what it will mean when the dust settles. Will "womens" and "childrens" start appearing in dictionaries as modifiers? Will grammar books start to acknowledge phantom apostrophes (kind of like the zero relative you create when you change "I know that you like me" to "I know you like me")?

I just came across in a document I'm editing: "... those noise-cancelling headphones beloved of frequent flyers."

I don't remember ever hearing "beloved of" before. I thought it was always "beloved by." I tried some wondering and Googling, but the hits I got didn't help: 1.5 million for "beloved by," but most of them followed by the name Toni Morrison. 1.1 million hits for "beloved of," including lots of constructions like, "His beloved of twenty years."


Still learning something new every day ...

Posted by June Casagrande at 1:29 PM No comments:

Posted by June Casagrande at 1:22 PM No comments:

A fraudster posing as West Virginia's governor got caught because a letter he sent out was riddled with bad grammar.

Here's the moral:
If your grammar's so bad that West Virginians notice, you should stick to shoplifting.

Posted by June Casagrande at 9:47 AM 2 comments:

Words that Inexplicably Rub Me the Wrong Way

I'm not sure why I hate the word sugar. Lord knows I eat enough of the stuff. But, when spoken, it really grates on my ear. Those consonants just don't belong so close together. Shggrr. It's so fuzzy and tongue-twisting compared to Spanish's crisp azucar and French's oh-so-French sucre.

And don't get me started on Suge Knight. I realize that spelling it "Shoog" or "Shugg" was not an option. But was it really better to spell it in a way that suggests the pronunciation "Sooge"? He should have stuck with Marion. Now there's a name with real street cred, courtesy of one D.C. mayor.

Longtime New York TV newsman Ernie Anastos recently told a colleague, on air, something that sounds a whole lot like "keep fucking that chicken." The context makes it more baffling. It seems he may have been trying to express something akin to "Keep up the good work."

I've never understood the mindless banter of local broadcast news nougatnoggins. But this is a step beyond.

Sure, he may have said "plucking." But I prefer an Urban Dictionary-type interpretation. Or perhaps his colleague really is henpecked.

This Job Is Gettin' to Me

Before I started copy editing, I never would have questioned this lede from an AP story:

President Barack Obama on Thursday shelved a Bush-era plan for an Eastern European missile defense plan that has been a major irritant in relations with Russia.

But these days I can't even pay attention to the meaning of the words because I'm too distracted by: a plan for a plan.

I 'spose I would have edited that to read: "... shelved a Bush-era Eastern European missle defense plan ..."

Posted by June Casagrande at 8:20 AM 2 comments: 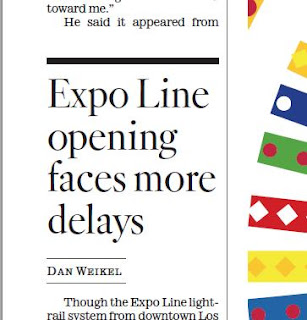 I don't criticize headline writers. I pity them. (I've been there.) Sometimes they have no choice but to use a verb form as a noun (i.e. the gerund "opening") and use as a verb a word readers might first identify as a noun ("faces").

Then again, maybe I'm the only person who saw this and thought: Opening faces? That's gotta hurt.

Posted by June Casagrande at 10:17 AM No comments: 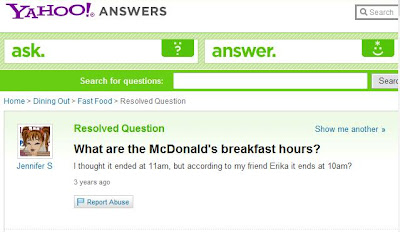 Any statement can be a question. When speaking, you just inflect upward. When writing, you just slap a question mark at the end, which implies an upward vocal inflection. So it's, like, Valley girl talk?
Still, question marks like the one after "10am" in this Web posting annoy me. My guess is that the writer didn't really intend to imply an upward inflection. She certainly wasn't asking whether Erica says that. The writer used the question mark only to make clear that she wanted an answer. It's like putting a question mark after "Guess what."
And, considering how unreasonably peevish I am about that, we probably shouldn't get into the topic of people who seek definitive answers about McDonald's hours not from McDonald's but a from a friend named Erica then seek confirmation from faceless strangers.

Posted by June Casagrande at 10:26 AM No comments:

I Appreciate the Vote of Confidence 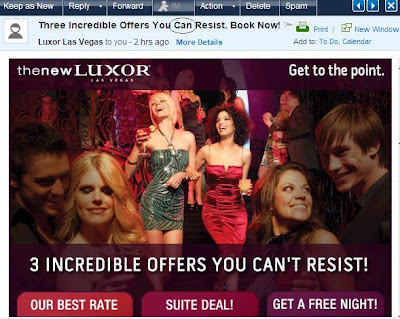 Typo scouting is not my thing, though you wouldn't know it from looking at my blog lately. I'm not looking for typos, but, like this promotional e-mail for Luxor Las Vegas, they keep finding me.
What does this spike in typos in my little world mean? Does it mean that copy editing, my most marketable skill (unless break dancing makes a comeback, and we all hope it will), is becoming obsolete? Will I soon be sitting in a dump atop a stack of VCRs along with a lot of other badly dressed white people arguing about hyphenation and/or who gets the cheese stuck to an old pizza box?
If corporations' and publications' quality standards keep heading in this direction, call me Junkyard Junie.

From the English-language Version of a French University's Website 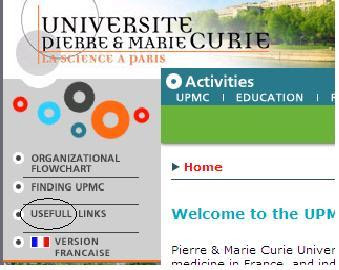 Posted by June Casagrande at 12:12 PM No comments:

I try not to get irked by words like "incentivize." I understand why other people do, but I figure there's no use in letting acceptable usages get under my skin. Best to save my energy for stuff like "enthused" in quotation attributions. ("'It's a great deal,' Thompson enthused.")

But over the weekend, I heard an "incentivized" I just cannot let stand. I was in the kitchen, where I could hear the TV playing in the living room. There was some documentary-type show on about the making of Cirque du Soleil's "Love," the Beatles-inspired acrobatic stage show playing at the Mirage in Vegas. One of the people involved in the production was saying how expensive it is to put on "Love." He added that this huge investment "incentivized me" to turn a profit.

See what I mean?

Posted by June Casagrande at 9:08 AM No comments:

So if I can so easily understand that, why am I still completely baffled by the Twitter phenomenon? Why would anyone care that I'm changing the cats' water or watching "Family Guy" reruns?

You know, back in my day, we had complete social disconnectedness -- and we liked it!