Signs of a Bigger Problem

This is not one of those blogs with lots of pictures of poorly punctuated signs. But this pair of signs I noticed in a parking lot the other day was just too good to pass up. They appeared right next to each other, like this: 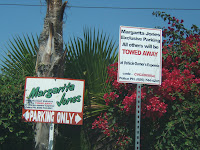 Yet upon closer inspection they revealed some interesting differences: 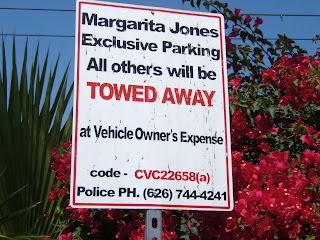 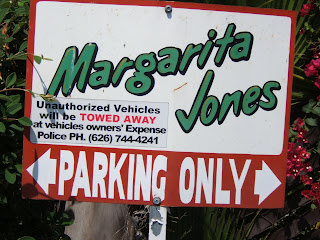 " ... at vehicles owners' expense ..."
I like this because, to me, it doesn't reveal the stupidity of the signmaker. It reveals the stupidity of the system. What IS the best way to handle issues of agreement in these signs?
In the first one, at vehicle owner's expense is a fine choice. But it ignores a flaw. It attributes to multiple vehicles a single owner.
The sign with the sticker appears to be a noble attempt to fix this. To correspond with multiple vehicles, it references multiple owners. You've got to applaud that effort.
But vehicles owners doesn't work. The plural of vehicle owner doesn't include an S after vehicle. You could use vehicles, but it only makes sense as a possessive: vehicles' owners'. And that's just weird.
The only way to get around this agreement problem without creating weird possessive issues is to write:
All unauthorized vehicles will be towed at the expense of their respective owners.
But that defies another priority for signmakers: economy of words.
So with that, I'll just express my sympathies for the people who have to make these signs and, out of respect, will refrain from mentioning the issue of capitalization.

Posted by June Casagrande at 7:56 AM

Hey, this really has nothing to do with signs, so I won't even pretend a segue, but I was just at a geekfest (technology seminar) and heard yet another nerd boy use the superfluous term "administrate." I can call someone a "nerd boy" because I'm one too. It's relevant because my people have a particular weakness for "administrate," no matter how much hell it bugs out of me. This and the similarly, sadly common "orientate" are two of my biggest verbal peeves. I don't recall hearing you rant about them and would love it if you did. Assuming, of course, that you have the correct--um, that is, my--perspective on this waste of a perfectly good "ate."

BTW, I was just in a big name bookstore and they had a back-to-school display set up of grammar books. Neither of yours was there, so I pointed out to an employee that they should have at least included "Grammar Snobs." The employee expressed her own appreciation of it and said that she was pretty sure it had been there but that they'd sold the last copy. That seemed encouraging on both counts. Assuming she wasn't jerking my chain.

I'm doing a lot of assuming in this comment, aren't I? Perhaps presuming as well, given that neither of my random remarks has anything to do with your original post. . . .

Thank you for hounding a bookstore employee for me. That was nice. They're starting to see through my disguises.

I've only heard "administrate" once or twice, but I distinctly remember the taste of bile. I have to hold back formal judgment until I have time to look it up (now I'm off to shred others' prose). So please don't construe that bile reference as in any way judgmental. I meant it in the spirit inclusive and forviging biliousness. Yeah, that one.